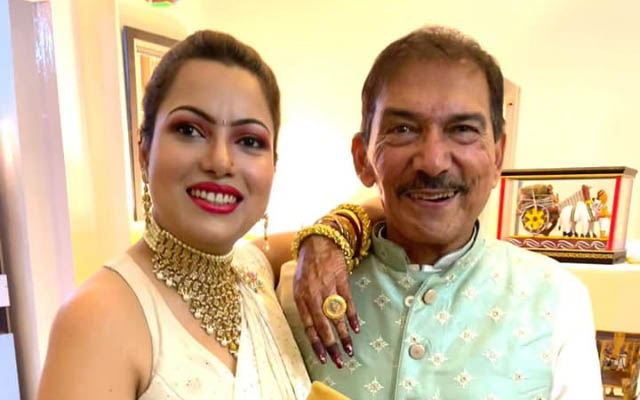 New Delhi 04th May, 2022: Former Indian cricketer Arun Lal's second marriage at the age of 66, wife is 28 years younger, see photos Former India opener Arun Lal has become a groom for the second time at the age of 66. He made Bulbul Saha his partner in a private function. Arun Lal had also sought approval from his first wife Reena for a second marriage.

Former India opener Arun Lal has become a groom for the second time at the age of 66. He made Bulbul Saha, 28 years his junior, in a private ceremony. Pictures of the couple's wedding are going viral on social media. Arun Lal had separated from his first wife Reena, but he had also sought her approval for a second marriage. In fact, Arun Lal's first wife Reena is ill. A few days ago, it was reported that the former cricketer and his second wife Bulbul would take care of Reena even after marriage. The former cricketer and Bulbul were married in Kolkata. Pictures of the two's turmeric ceremony also went viral last week. Bulbul has shared the wedding photos on her Facebook account.

Arun Lal is the head coach of the Bengal team. The Bengal team had made it to the final of the Ranji Trophy 2019-20, but could not win against Saurashtra. Bulbul Saha is a teacher by profession.