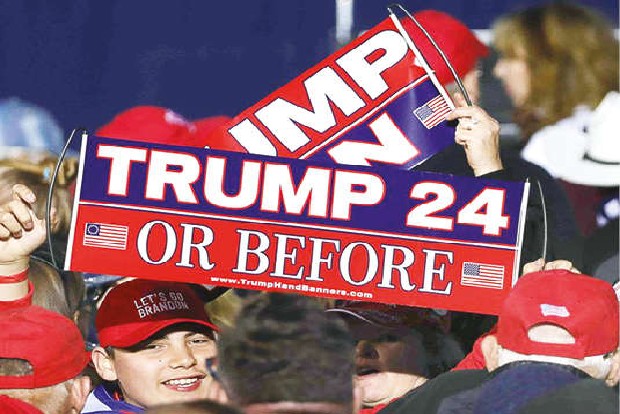 The probes, which are unfolding in multiple jurisdictions and consider everything from potential fraud and election interference to the role he played in the Jan. 6 insurrection, represent the most serious legal threat Trump has faced in decades of an often litigious public life.

As he prepared to tee off at one of his Florida golf courses, a fellow player introduced Donald Trump as the “45th president of the United States.” “45th and 47th,” Trump responded matter-of-factly, before hitting his drive. The quip — a moment of levity on the links captured on shaky cellphone video — was a reminder that the former president often has another presidential run on his mind. But the declaration belied the growing challenges he’s confronting as a series of complex legal investigations ensnare Trump, his family and many associates.

The probes, which are unfolding in multiple jurisdictions and consider everything from potential fraud and election interference to the role he played in the Jan. 6 insurrection, represent the most serious legal threat Trump has faced in decades of an often litigious public life. They’re intensifying as a new poll from The Associated Press-NORC Center for Public Affairs Research found Trump’s iron grip on the GOP may be starting to loosen.

His popularity among Republicans is declining somewhat, with 71% saying they have a favourable opinion of Trump compared with 78% in a September 2020 AP-NORC/USAFacts poll. But the new poll shows only a narrow majority of Republicans — 56% — want him to run for president in 2024. The poll found that 44% of Republicans do not want Trump to run.

Despite the legal and political headwinds, those around Trump describe him as looking to the future and emboldened by a sense of invincibility that has allowed him to recover from devastating turns, including two impeachments, that would have ended the careers of other politicians. Instead of receding from the spotlight, he’s teasing a comeback run for president as he escalates his attacks against those investigating him and his company.

“He’s in great spirits,” said Darrell Scott, an Ohio pastor and Trump ally who met with the former president this week. Trump huddled with top aides in Florida this week as he plots a midterm strategy that could serve as a springboard for future efforts. And be held another campaign-style rally in Texas on Saturday evening ahead of the state’s March 1 elections that formally kick off the midterm primary season.

Speaking at county fairgrounds outside of Houston, Trump sketched out the beginnings of a 2024 campaign agenda, saying he would ban critical race theory — it views American history through the lens of racism — from classrooms, the military and government on “the first day, first hour, if I decide to run and if we win.” And he said he would make sure those charged in connection with the deadly Jan 6 riot at the US Capitol were treated “fairly.”

“And if it requires pardons, we will give them pardons,” he said of his supporters, who stormed the building in an effort to block the certification of President Joe Biden’s win. But even as he projects a sense of inevitability that the nomination would be his if he wants it, his effort to freeze the field of Republicans eyeing the 2024 field has been uneven. Some, including former Vice President Mike Pence and former Secretary of State Mike Pompeo, have so far refused to demur, making speeches and travelling to key states that suggest they are strongly considering campaigns. Florida Gov Ron DeSantis is also seen as another contender for the nomination and drew attention recently when he said that one of his biggest regrets as governor was not pushing back when Trump urged Americans to stay home in the early days of the COVID-19 pandemic to stop the virus’s spread.