To hippos, a wheeze and a honk mean more than just ‘hello’ 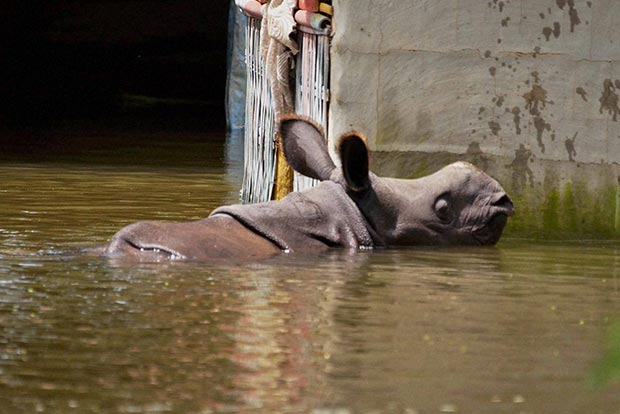 To hippos, a wheeze and a honk mean more than just ‘hello’

Hippopotamuses are some of the most unfriendly creatures in the animal kingdom. “Apart from mosquitoes, they are the most dangerous animal in Africa, the ones that kill the most people,” said Nicolas Mathevon, a professor of animal behavior at the University of Saint-Etienne in France.

“People underestimate them. They swim very fast and don’t hesitate to attack boats. They are in the water most of the time, but they can move out of the water very fast. Entering their territory can be quite dangerous.”

But you can’t say hippos don’t give warnings to strangers. They make loud noises, and Dr Mathevon and his colleagues have worked out some of what they mean. Their results, published Monday in Current Biology, suggest they can distinguish friends from acquaintances, and acquaintances from strangers, by the way they sound.

Hippos are hard to study. It is almost impossible to identify and mark individual animals, and difficult to find them even when marked. They spend the night feeding on land, and then retreat to the water during the day. Individuals may move from one pod to another — the details of their social organisation are poorly understood.

Dr Mathevon and colleagues studied the animals at the Maputo Special Reserve in Mozambique, where several lakes are inhabited by one or more groups, or pods, where they recorded the calls of hippos in seven pods. Then they played recordings back to the others. They found that hippos’ verbal repertoire includes grunts, bellows and squeals; their “wheeze honks” can be heard more than a half-mile away, but its social function is unclear.

In 10 separate experiments, they played recorded calls to the animals: first by playing a hippo’s voice to its own group, second using a call from a neighboring group and finally with the sound of from another lake.

The intensity of the response was lowest when they heard recordings of individuals from their own pod and highest when they heard the honk of a stranger. The reaction to a call from a neighboring group was little different, and only hearing the call of an animal from a pod of strangers provoked territorial marking by defecating while flicking their tails to spread the feces.

In animal behavior studies, it can be difficult to maintain objectivity, Dr Mathevon said. “There’s always a danger to imagine things that do not exist,” he said. “So you have to take some precautions,” in both the techniques for gathering data and the methods used to interpret it.

Before each recording, the researchers waited until the animals were calm. Five different observers made assessments and compared their counts. Researchers not involved in producing the videos scored the responses three-point scales using three criteria: distance of approach toward the sound, degree of marking by dung spraying and number of hippos vocalising.

The study may have implications for the preservation of the species. Hippopotamus populations are declining, and the International Union for Conservation of Nature classifies them as vulnerable.

“The finding that hippos show stronger reactions to the calls of an unknown hippo can be applied to conservation efforts,” said Diana Reiss, an animal behavior researcher and professor of psychology at Hunter College in New York who was not involved in the study. “It may be important and beneficial to habituate hippos that may need to be relocated to other areas for conservation purposes, to the calls of unfamiliar hippos they will be encountering in new locations.”

The study highlights that there is much to learn about hippos and group dynamics. “Hippos have a social system that is complicated, with various interactions,” Dr. Mathevon said.