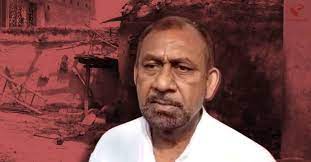 The local Trinamool Congress (TMC) block president was arrested Thursday for the 21 March Rampurhat violence that saw eight people burnt to death. Anarul Hossain, 52, was taken into custody three hours after West Bengal Chief Minister Mamata Banerjee ordered his arrest, on camera, while on a visit to the site of the carnage, Bagtui village in Birbhum district. Hossain is the first TMC member to be put behind bars for the gruesome violence, that was allegedly triggered by the killing of local party member and reputed strongman Bhadu Sheikh earlier the same evening. In her statement at the site, Mamata said that “the kin of the victims said they telephoned Anarul and asked him to send police to Bagtui but he didn’t”. “I want him arrested. He can surrender but, otherwise, I want him to be arrested immediately,” she told Director General of Police Manoj Malviya at Bagtui.

Hossain was subsequently arrested from Tarapith, 15 minutes away from Bagtui.

A resident of Sandhipur in Bengal’s Hooghly district, Hossain is said to have worked as a mason before he started his political career with the Congress. In the Trinamool Congress, he is said to have been recognised for organising grassroots support for the party. He has been handling the block president’s post since 2018. Anarul is likely to be produced in Rampurhat court Friday after his medical examination. Mamata arrived in Bagtui a day after Prime Minister Modi offered central help to the state government to book the culprits behind the violence.She told the DGP that she doesn’t “want to hear someone has run away and we haven’t been able to arrest him yet in this case”. “Talk to the villagers and make a watertight case,” she said in the presence of the victims’ relatives.

Mamata Banerjee, who is also the state home minister has been in trouble after Rampurhat violence. She was scathing in her assessment of police action in the matter. “The sub-divisional police officer (SDPO) knew what was happening, the inspector in charge (IC) knew what was happening but didn’t take any action,” she said. “There is a larger conspiracy here. I want police picketing here continuously.” Both the SDPO and IC have been placed under suspension.In light of the violence, the DGP Thursday informed all the SPs that “a 10-day special drive to uncover arms and ammunition will be held throughout the state with immediate effect”.