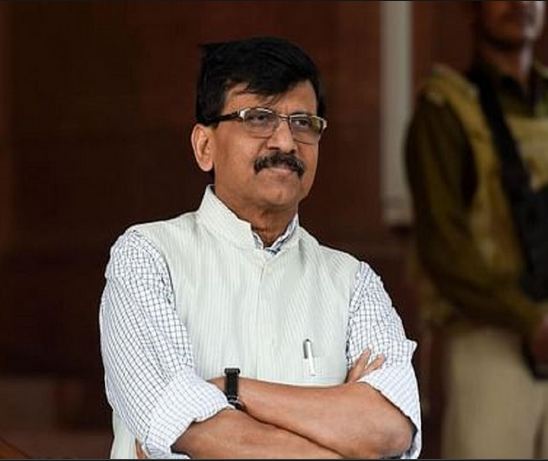 The ED team is present at the house of Shiv Sena leader Sanjay Raut for nearly four hours. ED officials had reached his residence early this morning. Meanwhile, Sanjay Raut was seen peeping out of the house. News agency ANI has also released its video. Actually, the ED team is interrogating Sanjay Raut in the Patra Chawl land scam case of more than 1000 crores of Maharashtra. He was summoned by the ED on July 27. However, he did not appear before the authorities. After this ED officials have reached his house. It is believed that the ED team can interrogate Raut by taking him into custody. Raut is accused of not cooperating in the investigation.

Even if I die, I will not surrender : Sanjay Raut
Meanwhile, Sanjay Raut's tweet has surfaced. He wrote on his Twitter handle, I have nothing to do with any scam. I am saying this by taking oath as Shiv Sena chief Balasaheb Thackeray. Balasaheb has taught us to fight. I will continue to fight for Shiv Sena. He termed the action of the ED as a false action. Said there is false evidence. I will not leave Shiv Sena, even if I die, I will not surrender.
Must go to Nawab Malik
Meanwhile, the statement of BJP leader Kirit Somaiya has come to the fore. He has said, I had given evidence of the loot of Sanjay Raut. Raut, who looted the people of the state, will be accounted for today. He will have to go to jail to be with Nawab Malik. On the other hand, Nitesh Rane has said that now the people of Chawl will get justice7 Those who used to spoil people's morning every day, their morning got spoiled. Supporters present outside Raut's house
As soon as the news of the arrival of the ED team at Sanjay Raut's house came to the fore. His supporters also reached the house. According to the information, supporters of Sanjay Raut are standing outside his residence 'Maitri' and shouting slogans.

Raid at three different locations
It has come to light that three ED teams have raided simultaneously. One team has reached Raut's house in Mumbai, while two teams are conducting a search operation at different places of Raut.

What is Patra Chawl scam
This case is related to Patra Chawl in Goregaon area of ​​Mumbai. It is a plot of Maharashtra Housing and Area Development Authority. There is an allegation of being a scam of about 1034 crores. In this case, assets worth Rs 9 crore of Sanjay Raut and Rs 2 crore of Raut's wife Varsha have been attached. It is alleged that real estate businessman Praveen Raut cheated the people living in Patra Chawl. A construction company got the job of constructing 3000 flats on this plot. Of these, 672 flats were to be given to the residents already living here. The rest was to be given to MHADA and the said company, but in the year 2011, parts of this huge plot were sold to other builders.

How the case came to light
Actually, in the year 2020, the PMC Bank scam that surfaced in Maharashtra was being investigated. Then the name of the said construction company of Praveen Raut came to the fore. It was then learned that a loan of Rs 55 lakh was given to Sanjay Raut's wife Varsha Raut from the bank account of builder Raut's wife. It is alleged that Sanjay Raut had bought a flat in Dadar with this money. Praveen Raut is the former Director of Guru Ashish Construction Pvt Ltd.