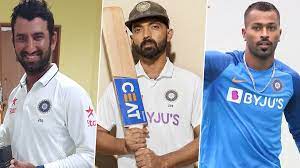 Accordingly, Pujara, Rahane and Ishant Sharma, who were in Grade A are now in Grade B. after a slump in form that saw them being dropped from the upcoming home Test series against Sri Lanka.

Out of favour veteran batter Cheteshwar Pujara and former Test vice-captain Ajinkya Rahane were downgraded in the latest central contracts list of the BCCI that was ratified by the Board's Apex Council on Wednesday.

The BCCI has four categories  A+ which has annual remuneration of Rs 7 crore while A, B and C categories are valued at Rs 5 crore, Rs 3 crore and Rs 1 crore respectively.

Last time, 28 cricketers were provided central contracts but this year, 27 have been awarded contracts with Rohit Sharma, Virat Kohli and Jasprit Bumrah static as A+ players.

Accordingly, Pujara, Rahane and Ishant Sharma, who were in Grade A are now in Grade B. after a slump in form that saw them being dropped from the upcoming home Test series against Sri Lanka.

That they will be downgraded was reported by PTI on January 20.

Group A, which earlier had 10 players, has now shrunk to five with Ravichandran Ashwin, Ravindra Jadeja, Rishabh Pant, KL Rahul and Mohammed Shami retaining their slots.

The biggest demotion, however, was for injury-ravaged all-rounder Hardik Pandya, who has been shunted out from Grade A to C in the list along with senior opener Shikhar Dhawan, who now plays only one format and that is ODIs.

Controversial keeper-batter Wriddhiman Saha, who has been dropped from the Test team, will still be richer by Rs 1 crore after being demoted from group B to C.

Saha, who has breached the central contract clause by public comments on selection matters and statements on BCCI president Sourav Ganguly and head coach Rahul Dravid, has been kept in group C even though it has been made clear by the team management that he is unlikely to play for India again.

On the day, ratification happened but this was decided long back that some of the non-performers will be demoted.

Spinner Kuldeep Yadav and pacer Navdeep Saini, who were part of the earlier group, have been dropped from the list altogether.

Mayank Agarwal, who has been inconsistent throughout, has now been demoted to group C from group B.

The ones who have been rewarded are Mohammed Siraj, who is now in group B for his lion-hearted performances while Suryakumar Yadav, by virtue of playing the requisite number of games, is now in group C.

Deepti, Rajeshwari promoted among women. In the women's Central contracts, Deepti Sharma and Rajeshwari Gayakwad joined Harmanpreet Kaur, Smriti Mandhana and Poonam Yadav who were already in group A which has an annual retainership fee of Rs 50 lakh.

Mithali Raj and Jhulan Goswami remain in group B (Rs 30 lakh). Jemimah Rodrigues has been demoted from Group B to C (Rs 10 lakh).

Venues finalised for South Africa series. The BCCI also ratified five venues for the five-match T20 series against South Africa. The matches will be held in Cuttack, Visakhapatnam, Delhi, Rajkot and Chennai. The series will be played in June after IPL.

Malhotra stepped down a couple of months back to rejoin Delhi Capitals.

Kuruvilla, who had pipped Ajit Agarkar to claim the West Zone selector's post, had to relinquish his post as constitution states any national selector (junior or senior) can't stay in the post for more than five years cumulatively.

While appointing Kuruvilla, it wasn't taken into account that he had completed four years as chairman of junior national selection committee, so all he had was one year.

National Women's T20 from April 15. The senior women's domestic T20 event, which was postponed due to the third wave of the Covid-19 pandemic, will start from April 15 and will go on till May 12.

The Apex Council also approved the conduct of C K Nayudu Trophy from March 15 to May 1.