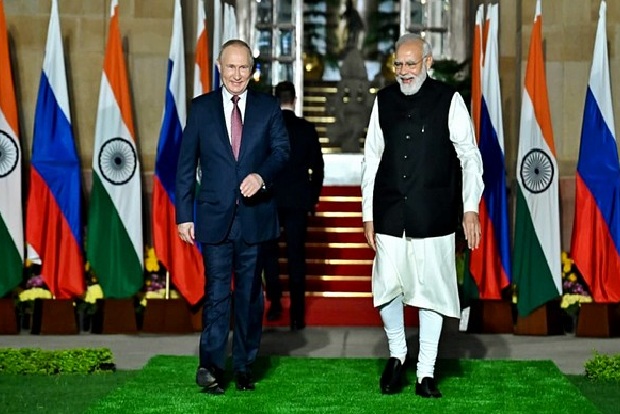 The meeting between Prime Minister Narendra Modi and Russian President Vladimir Putin for the 21st India- Russia Annual Summit has begun at the Hyderabad House here on Monday.

This is the first in-person between them since they met on the sidelines of the BRICS summit in 2019 in Brasilia. There have been six telephonic conversations between the two leaders since then apart from the virtual meetings that they've attended for multilateral summits.

The visit is in continuation of the tradition of annual summits held alternately in India and Russia. Earlier in the day, the two countries held their first 2+2 Ministerial Dialogue. The two countries on Monday signed an agreement for the procurement of 6,01,427 assault rifles AK-203 through Indo-Russia Rifles Pvt Ltd, under the military-technical cooperation arrangement for 2021-31.

Putin had said on Wednesday that he intends to discuss with Prime Minister Narendra Modi new "large-scale" initiatives on further developing "specially privileged" Russian-Indian relations. "This partnership brings real mutual benefit to both states. Bilateral trade shows good dynamics; ties are actively developing in the energy sector, innovation, space, and the production of coronavirus vaccines and medicines," Putin had said.