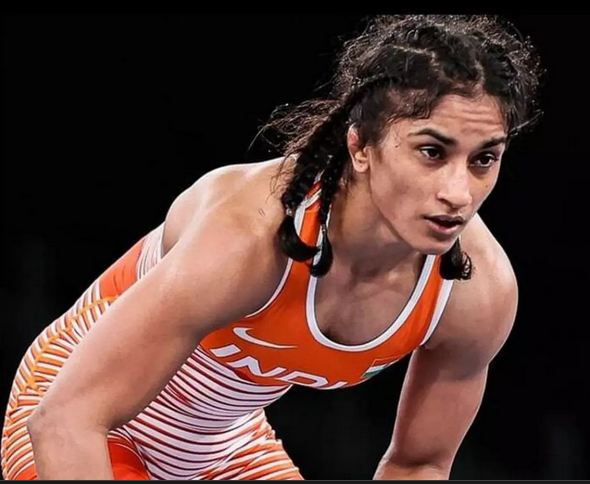 When Vinesh found gold, her in-laws were stunned

Everyone was expecting the daughter-in-law to win gold from the afternoon at the in-laws of wrestler Vinesh Phogat in Pratap Colony of Kharkhoda. In the very first wrestling itself, Vinesh had expressed his intentions to the opponent. Vinesh's in-laws also remained glued to the TV. Vinesh's father-in-law, Rajpal Rathi, the entire family and other relatives together saw the daughter-in-law's competition. While Vinesh is in Kharkhoda, Pratap practices in school. Vinesh's victory filled the wrestlers of Pratap School with enthusiasm. Vinesh's coach Dronacharya Awardee Omprakash Dahiya had also reached Vinesh's house in the afternoon to watch the match. Relatives and many other friends also gathered at Vinesh's house. Although Vinesh's husband Somvir Rathi had to go to Ajmer in connection with work, but he also kept watching the match on mobile. The family rejoiced fiercely as soon as the daughter-in-law won the gold. They congratulated each other by distributing sweets.

As soon as the wrestler Naveen Malik of village Pugathala in Sonipat district of Haryana defeated Pakistan's wrestler Mohammad Sharif Tahir 9-0, the family and villagers started dancing with joy. Celebrated the victory of the son by distributing sweets. There was an atmosphere of happiness in the village of wrestler Naveen Malik since afternoon in Pugathala. The family and villagers had gathered in front of the TV to see Naveen's wrestling. Whenever Naveen won a point, his house reverberated with applause. After winning gold, they celebrated happiness by feeding each other sweets. Naveen's father Dharampal says that we are proud of the son's achievement. Apart from him, his mother Gunmati, brother Praveen and villagers congratulated each other on Naveen's excellent game. There were tears of joy in the eyes of Naveen's parents on the victory of their son. Father Dharampal said that he has a simple family and makes his living by farming.