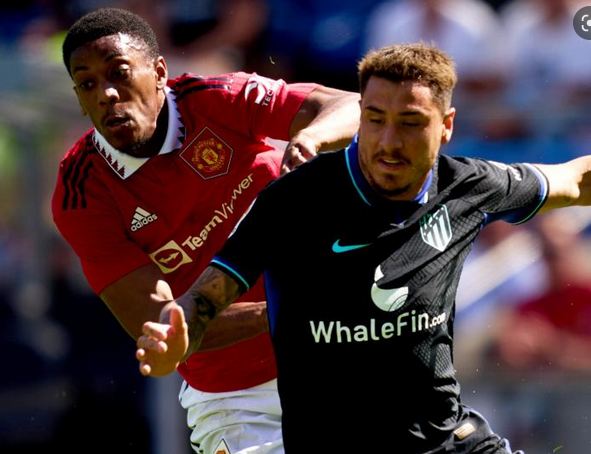 Manchester United gave a glimpse of a potential starting line-up for next week's Premier League opener during a 1-0 friendly loss to Spain's Atletico Madrid in a match played in Norway. This is Erik ten Hag's first loss as manager after three wins and one draw in pre-season. Man United have their final pre-season test scheduled for Sunday at Old Trafford before starting their league schedule a week later against Brighton, also at Old Trafford. Another Spanish team, Rayo Vallecano, will be the opponents to close the pre-season on July 31, and Cristiano Ronaldo is expected to see his first minutes in this match. A late goal three minutes from time from Atlético's Joao Felix decided the game in Oslo, although it was a hard-fought result for a positive United side who produced several looks. Man United goalkeeper David De Gea, who had a quiet afternoon, was unable to stop Felix's burst, which was overshadowed by his team-mate covering the play. New United signing Lisandro Martinez did not see minutes but Christian Eriksen came off the bench to make his Manchester United debut after playing behind closed doors against Wrexham earlier this week. His quality was immediately apparent as he assisted two chances just minutes after his arrival. Jadon Sancho sat out the game after being ill all night. Man United applied themselves in the game, mainly worked to win the ball back and did not back down from Atlético Madrid's physical play. Marcus Rashford and Anthony Elanga had efforts on target, Harry Maguire was dangerous with several corners and Facundo Pellistri even had a late goal blocked. The negative for United was the straight red card Fred received for a last-minute tackle on Alvaro Morata, which brought the potential for a sending-off against Brighton. The Brazilian midfielder had an otherwise good show. The Hag pushed his players for extra minutes in this game and he only made four substitutions, the first pass coming in the 70th minute. Atlético introduced 10 new players in the 60th minute and match-winner Felix was part of that group.