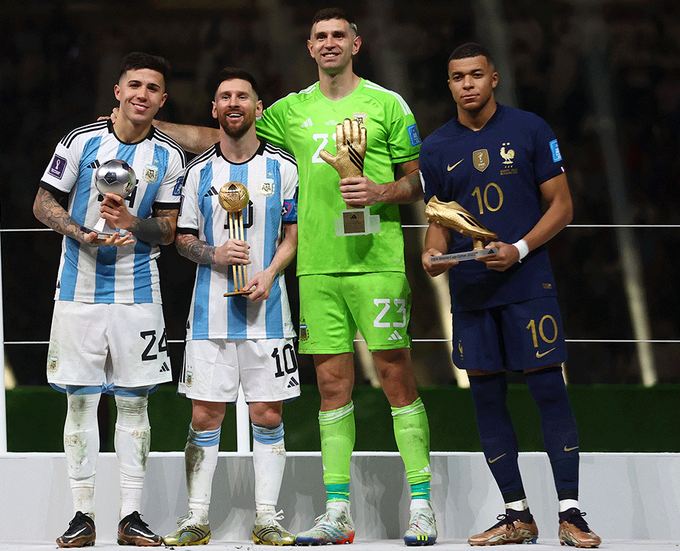 After the final, awards were given for some of the best performances in the tournament. These include the World Cup Golden Boot, World Cup Golden Glove, FIFA Young Player Award and FIFA Fair Play Award. Let's know who got what.

In the final of the FIFA World Cup, Argentina won the trophy by defeating France 4-2 in the penalty shootout. There were many exciting moments in the match. Despite taking a 2-0 lead in the first half, Argentina only fell behind in the second half through Kylian Mbappe.
In the second half, Embappé scored two goals in two minutes to bring France back. The match went into extra time after the score remained equal at 2-2 till full time. After Messi scored another goal, Embappé brought France back again and the score was equal to 3-3. Then Argentina won in the penalty shootout. Mbappe was the top scorer of the tournament with eight goals.

After the final, awards were given for some of the best performances in the tournament. These include the World Cup Golden Boot, World Cup Golden Glove, FIFA Young Player Award and FIFA Fair Play Award.

The Golden Boot is awarded to the player who scores the most goals in the tournament. If there is a tie between multiple players, the criteria used to break the tie are in this order—most assists and fewest minutes on the field.

The Golden Boot was first awarded at the 1982 World Cup in Spain when Italy's Paolo Rossi won it with six goals. At that time it was called the Golden Shoe. In 2010, the award was renamed the Golden Boot.

The Golden Ball, awarded to the best player in the tournament, has a subjective selection process. FIFA's technical team selects some players and the winner is selected based on votes from representatives of various media organizations around the world.

The Golden Glove for the best goalkeeper of the World Cup was first awarded in the 1994 edition in the USA. It was established as the Lev Yashin Award in honor of the former Soviet Union goalkeeper and later in 2010, to re-name the Golden Glove. However, it is also subjective like the Golden Ball.

The Goalkeeper Award is not decided through a vote but by deliberation of the FIFA Technical Study Group. In the midst of intense competition among several goalkeepers, preference is usually given to the most advanced in the tournament. Most goals saved and most minutes played are used as tie-breakers. Germany's Oliver Kahn is the only player to have won the Golden Glove and Golden Ball double in the 2002 edition in South Korea and Japan.