Inside Olympic bubble, a search for real China 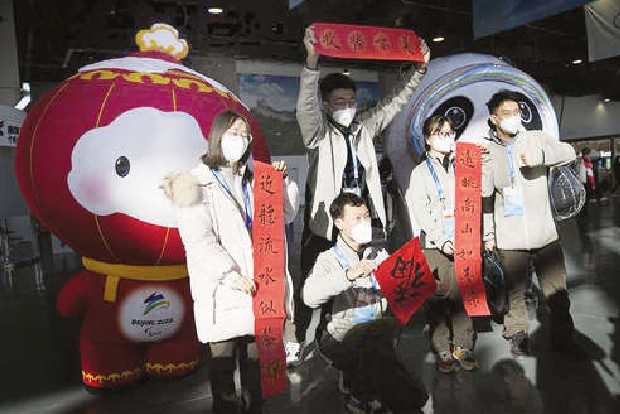 Inside Olympic bubble, a search for real China

Explore Guangzhou’s old city. Wander a historic neighbourhood in Shanghai. Visit with the giant pandas out west in Sichuan province. All these experiences are available to those attending the Beijing Olympics. By video-link — without ever leaving the press center.

Welcome to China. But not really. The Olympics are usually a once-in-a-generation opportunity for the host country to showcase its culture. This year, however, athletes, coaches and others travelling to the Winter Games in Beijing are entirely sequestered in a bubble so complete that it even contains its own intercity trains. It’s all part of the elaborate effort by China to control the spread of COVID-19 (and, some say, control the curious visitors as well).

Nothing is supposed to leave this alternate universe. But what clues of China might seep in? The country is celebrating Lunar New Year. That much is clear. Traditional lantern decorations adorn the streets outside (as seen from the Olympic shuttle buses) and the venues inside. You’re unlikely to participate in any actual celebrations — but the Games’ swag bag includes a small lantern decoration. If you have the souvenir, did you also have the experience? Forget a visit to the Summer Palace or the Great Wall, but there are large cut-out photos of these landmarks in the press centre.

One genuine part of China does pierce the bubble (even as it preserves another): Except for places where the International Olympic Committee provides the Wi-Fi, visitors to the Games are blocked from vast swaths of the internet by the country’s “Great Firewall.”

A small taste of what it might be like to live in China — and an insight into the ways the government seeks to control its people. Inside the bubble, unsurprisingly, there is a lot of longing for what is outside. In one the world’s great culinary destinations, only pale imitations of Chinese food are available.

Tabitha Peterson, a curler for Team USA, recalled that she and her sister, fellow Olympian Tara, visited Beijing in 2007. Back then, they were able to immerse themselves in the culture, she explained, to eat in restaurants, to try new food. Not at these Cruise Ship Olympics, in which participants do not so much enter China as sidle up to it. Still, Yao Qian, who is staffing a cultural exhibit in the press centre, said foreigners were able to experience something of China — pointing to a recent workshop inside the bubble where they learned how to write Chinese characters as part of New Year celebrations.

“This is a place to spread Chinese culture,” she said. “I want foreigners to learn more and more (about) Chinese culture.” With little to visit or photograph, many inside the bubble are keen to participate in another tourist pastime: buying souvenirs. Disappointment rippled through its denizens in the days before the opening ceremony as there did not seem to be that much to buy. Where were the plush toys of Bing Dwen Dwen, the chubby panda mascot? Where were the T-shirts and hats with the rings? “I didn’t know if what you would find in the bubble would really be authentic,” Jackson Haselnus, who works for Olympic Broadcasting Services, the host broadcaster for the Games, said as he waited in the line.

The search for authenticity leads many to wander the cordoned-off area outside the main press centre, where they can approach the fence that separates “Beijing” from Beijing. “Happy New Year!” the bubblers shout in Chinese, one of the few phrases they have learned. “Happy New Year!” comes back the reply, first in Chinese, then in English. Furious waving ensues on both sides. And there it is. A genuine interaction with genuine Beijingers. A moment of spontaneity to recount back home. And isn’t that what travel is all about?