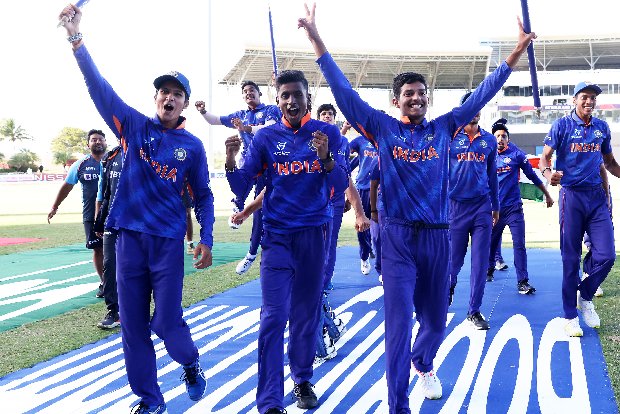 In a reflection of India's dominance, wicketkeeper Dinesh Bana finished the chase of 190 with two sixes and 14 balls to spare.

An utterly dominant India won a record-extending fifth U-19 World Cup title here on Saturday, beating England by four wickets in the final of an extraordinary campaign that was almost derailed by a COVID-19 outbreak.

The triumph bore resemblance to the exploits of world-class Indian U-19 teams of the past.

Intrepid and industrious in their approach, the starry-eyed Indian players' success stories also gave a glimpse into the world's most perfectly calibrated youth structure, which is capable of consistently producing world-class cricketers who are ever ready to take on the biggest of challenges.

In a reflection of India's dominance, wicketkeeper Dinesh Bana finished the chase of 190 with two sixes and 14 balls to spare.

On winning the toss in the big final, England captain Tom Prest rightly chose to bat first to avoid the ''scoreboard pressure'' during the chase. India did the next best thing: bowl out the opposition for a total -- 189 in this case, in 44.5 overs -- that failed to put them under pressure.

India were all over England before a gritty 95 by James Rew saved his team the blushes.

India kept taking wickets at regular intervals but not for once did the intensity of the team dropped.

For close to 19 overs, Rew and James Sales (34 not out) defied India with their 93-run eight-wicket stand, ensuring the 1998 edition winners recover from a horror 61 for six and then 91 for seven.

In response, India lost Angkrish Raghuvanshi without a run on the board but the extremely talented Shaik Rasheed shone with a composed 50 off 84 balls.

Coming off his magnificent century in the semifinal against Australia, skipper Yash Dhull fell for 17, but the duo of Nishant Sindhu (50 not out) and Bawa (35) took the team within striking distance of victory with a 67-run partnership for the fifth wicket.

It has been an extremely challenging ride for the Indian team in this edition of the tournament as multiple players from the side were infected by the coronavirus and at one stage even struggled to field eleven fit personnel. However, despite the huge setback that almost derailed their campaign, India came back a stronger unit focussed on correctly doing the things that were within its control.

Their clinical on-field performance told a very different story, a story far removed from all the troubles that the team went through off it, when as many as seven players were infected with the virus. India struck as early as the second over when Ravi sent back the dangerous Jacob Bethell (2) cheaply. The man from Bengal darted one in and then got it to hold its line as Bethell missed it completely after playing across the line. The early blow did not have any impact on George Thomas as he smashed Rajvardhan Hangargekar for 14 runs, including two fours and a six over deep midwicket, in the very next over.

However, Ravi struck again, this time bowling out Prest who dragged the ball on to his stumps, putting the Indians on the top at the Sir Vivian Richards Stadium.

Having failed to execute his pull shot, thanks to a bottom edge, Prest, who had earlier won a good toss, walked back dejected with his team in a spot of bother at 18 for two in the fourth over. Ravi had 2/2 in the first two overs.

Notwithstanding the situation his team found itself early into the big final, Thomas continued to attack and collected two boundaries against Ravi.

With Hangargekar going for 19 runs in his first spell, Dhull effected a bowling change and it worked almost immediately, but Kaushal Tamble could not hold on to Thomas' thick edge off Raj Bawa in the slip. England needed a partnership at that stage but that was not going to be. Medium pacer Bawa got the well-set Thomas to play an irresponsible shot that got a thick outside edge and landed in the hands of Dhull at cover. In all sorts of trouble at 37 for three at the start of the 11th over, England's desperate quest for a partnership was not answered, with William Luxton edging Bawa to be out caught behind before England could reach 50 runs.

Bawa was on a hat-trick as George Bell had no answer to an excellent delivery that kicked up and took a deflection on its way to the wicketkeeper Dinesh Bana.

With half the side back in the dressing room in the 13th over, the England U-19 were staring at a heavy defeat, their dreams of winning a first world title in 24 years quickly going up in smoke. There was not end to England's misery as Rehan Ahmed nicked Bawa to Tambe in first slip to leave the side reeling at 61 for six in the 17th over.

Bowling a tight line and length, India kept up the pressure on England and it paid dividends when wicketkeeper Alex Horton, trying to heave off-spinner Tambe over midwicket, ended up giving a simple catch to Dhull.

England were still seven runs short of reaching 100 at that stage, but they got there soon with James Rew reaching his 50 in 79 balls. In the company of the James Sales, he helped England reach 189.