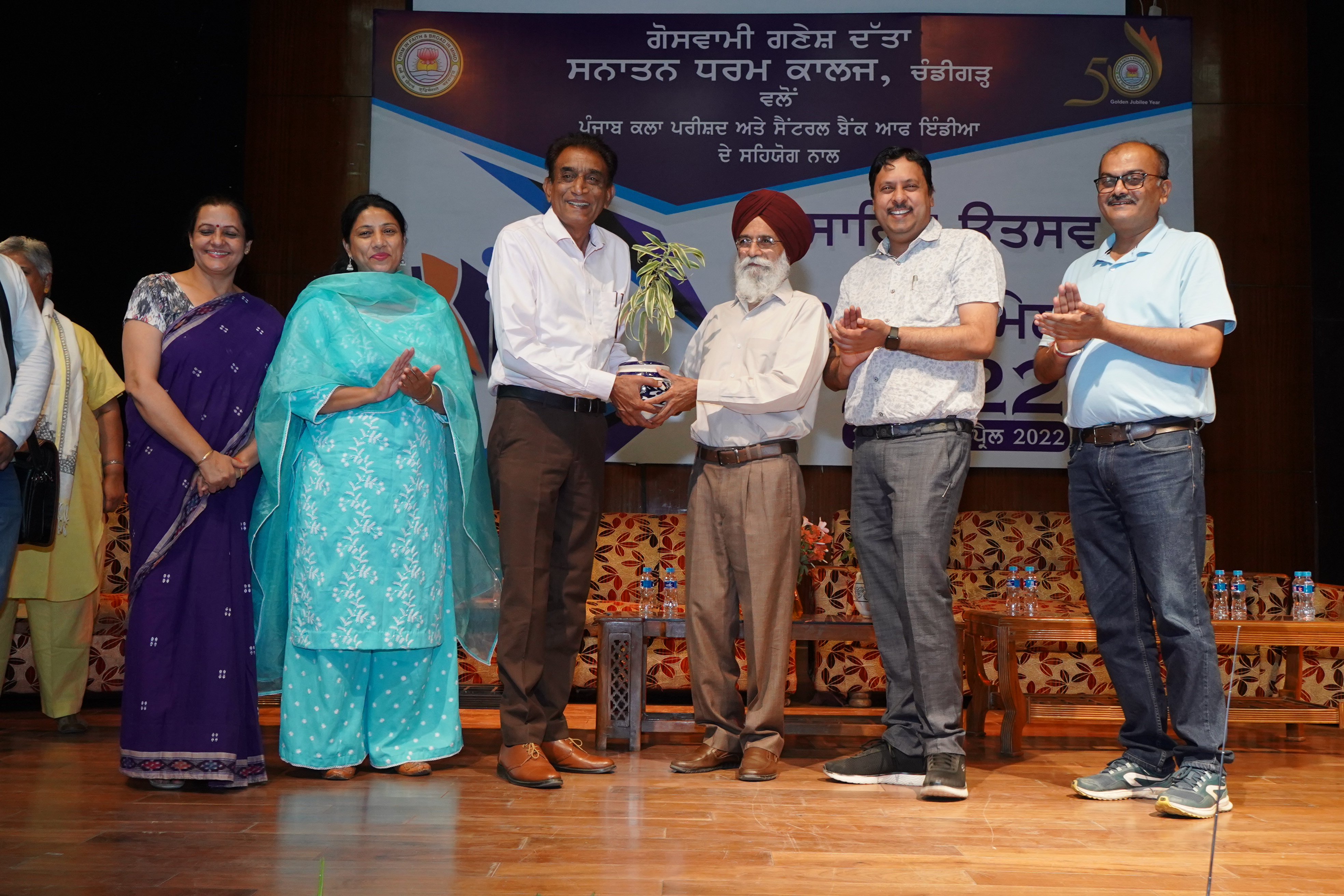 Chandigarh 23rd April, 2022: Goswami Ganesh Dutta Sanatan Dharma College, Chandigarh in collaboration with Punjab Arts Council and Central Bank of India has organised a 3-day ‘Literature Festival and Book Fair 2022’ from 22 to 24 April 2022 to celebrate the Golden Jubilee of the college and encourage creative expression in English, Hindi and Punjabi languages through a variety of literary sessions, cultural programs, panel discussions, conversations with eminent authors, poetic symposia and lectures.

The second day of this literary extravaganza consisted of a Panel Discussion, a Conversation and a Poetic Symposium.

The Panel Discussion, titled ‘Panjab: A Journey through Fault Lines’ was held by the panelists Taskeen and Yadwinder Singh. Mr Taskeen is a well-known Punjabi writer who has engaged with the nuances of Punjabi Culture, particularly through the prism of Marxist ideology.

Dr Yadwinder Singh has been teaching at Delhi University for more than a decade, has several books and articles to his credit. His modules of Sufi Poetry and Folklore and World Comparative Literature have been popular among Masters’ students. His area of specialisation also includes Modern Punjabi Literature with reference to Postcolonial Studies.

Amandeep Sandhu was the Guest for the Panel Discussion. Mr Amandeep Sandhu’s book ‘Roll of Honour’ was nominated for The Hindu Literary Prize for best fiction. Mr Sandhu’s first work of non-fiction, titled ‘Panjab: Journeys through Fault Lines’, was long-listed for the NIF-Kamaladevi Chattopadhyay Award 2020. The discussion commenced with a few words by Dr. Manisha Gangahar and was moderated by Dr. Pardip (Deep Nirmohi).

This was followed by a Conversation with Geet Chaturvedi who is an avant-garde Hindi writer, critic and translator who has been awarded the Bharat Bhushan Agrawal Award for poetry in 2007 and Krishna Pratap Award for Fiction in 2014. The Indian Express included him in a list of the 'Ten Best Writers' of India. His poems have been translated into 22 languages worldwide. Chaturvedi is the author of eleven books. His novella ‘Pink Slip Daddy’ was considered to be one of the best works of fiction in contemporary Hindi writing by the literary periodical Kathadesh. The English translation of his novella ‘Simsim’, translated by Anita Gopalan, won the PEN/Heim Translation Fund Grants, 2016.

The Conversation was moderated by Mr. Des Raj Kali who is a renowned Punjabi writer of short stories, novels, historical books and essays. Besides producing four books on historical research of the Gadar Party, Kali has written numerous essays on Punjabi society and culture. He also edits a literary quarterly Lakeer.

The final event of the day was a Poetic Symposium which presented a medley of  English, Hindi, Punjabi and Sanskrit poetry. The session was chaired by the renowned Padma Shri and Sahitya Akademi award winner Dr. Surjit Patar. Geet Chaturvedi was the Chief Guest. The Guests of Honour were Dr. Paul Kaur, Dr. Lakhwinder Johal and Mr. Vijay Vivek. The poets who presented their compositions were Madan Veera, Mukesh Aalam, Shabdeesh, Gurpreet, Swami Antar Neerav, Satpal Bhikhi, Narinderpal Kaur, Anil Adam, Mussavar Firozpuri, Amardeep Singh, Tanveer, Sandeep Sharma, Prof. Rajeshwar Prasad Mishra and Dr. Naveen Gupta. These stalwarts of Punjabi poetry mesmerised the audience with their lyrical, deep and witty poems. The students of the college also presented poetry, much to the delight of the audience.

These literary activities continued to be complemented by the ‘Book Fair’ which comprised 19 bookstalls by various publishers; and additionally, several painting stalls by the creative students of the college.