Europe on brink of war, Germany not in sight 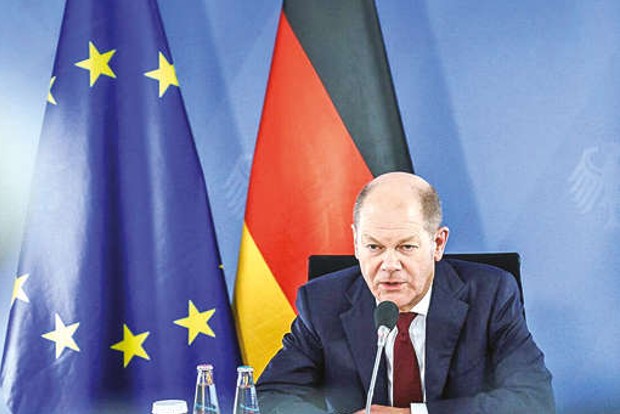 Europe on brink of war, Germany not in sight

The flags of the United States, Britain, Canada, Denmark, Poland and Turkey all jostled for space. One, however, was conspicuous by its absence: the black, red and gold of Germany.

Last week, Ukrainian legislators held up the flags of countries providing military and diplomatic assistance to Ukraine as it faces the threat of a Russian invasion. The flags of the United States, Britain, Canada, Denmark, Poland and Turkey all jostled for space. One, however, was conspicuous by its absence: the black, red and gold of Germany.

It was a fitting rebuke. Over the past few weeks, as Europe has seemingly approached the brink of war, Germany has been the odd man out. While the United States, Britain and Poland delivered weapons to Ukraine, the German government stoutly refused to do the same — and even seemed to block a transfer of weapons previously sold to Estonia. Across the continent, criticism has been fierce. For Germany’s Chancellor Olaf Scholz, who on Monday met with President Biden in Washington, it’s been a trial by fire. In office since December and at the head of a new coalition government, he has struggled to gain control of a situation that threatens to torpedo his authority. It’s a stark contrast to the way Angela Merkel stepped up after Russia annexed Crimea in 2014. Through active and energetic diplomacy, Merkel was able to bring about a cease-fire and something approaching a settlement. Under similar pressure, her successor has gone missing.

But the problem goes beyond Scholz to Germany itself. The crisis in Ukraine puts to the sword many of the country’s central assumptions about its role in the world. Wedded to the past and conflicted in the present, Germany — at least when it comes to foreign policy — looks stuck. But now is not the time to be indecisive. It needs to assert itself as a power broker and unify Europe’s response to Russian aggression.

The first difficulty, of course, is historical. Determined not to repeat the horrors of the past, the country is extremely wary about military engagement. That caution extends to weapons, which are generally not sold to conflict zones or when they could become instruments of human rights violations. In practice, economic interests often overrule principles: Saudi Arabia and Egypt receive German weaponry. Yet with Russia, the issue is particularly fraught. Never again, goes the catechism, shall German weapons be used to kill Russian citizens.

These historical arguments are not particularly useful in the 21st century. But Germany just can’t get over them: Pacifism and history are deeply ingrained in our public debate and particularly in the political culture of two of the three parties currently governing the country, the Greens and the Social Democrats.

For Scholz’s Social Democratic Party, relations with Russia are an especially emotional and contested issue. The party prides itself on its change-through-rapprochement approach during the Cold War, and many members defend the notion that Germany’s role is to be a buffer between the United States and Russia rather than to clearly side with the West. It’s a narrative rooted in nostalgia and idealism, but it has a cynical side: The party’s defense for Nord Stream 2, the controversial pipeline built to deliver more Russian gas to Europe, often clads straightforward economic interests in the gown of historical dignity. Is this just the usual German delusion? Is the country just making excuses for pursuing business as usual? Yes and no. Germany is certainly reluctant to leave its comfort zone, as its hesitancy — nowhere better captured than in its offer to send Ukraine helmets rather than missiles — clearly betrays. But some things have changed. As Annalena Baerbock, the foreign minister (and a co-leader of the Green Party), made clear to her Russian counterpart in January: Germany is prepared to act, even if “such measures hurt us economically.”