DAN THE MAN- Medvedev fights back to beat Auger-Aliassime 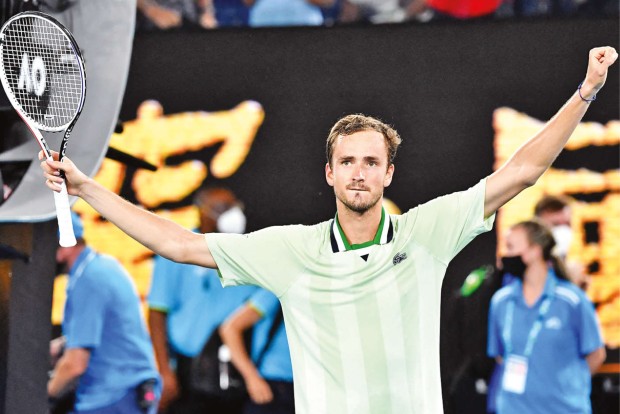 DAN THE MAN- Medvedev fights back to beat Auger-Aliassime

Daniil Medvedev rallied from two sets down and saved a match point before beating No.9 Felix Auger-Aliassime 6-7(4), 3-6, 7-6(2), 7-5, 6-4 in an Australian Open men’s singles quarter-final epic here on Wednesday.

The reigning US Open champion earned a stunning comeback victory in the final-eight contest that lasted four hours and 42 minutes. Second seed Medvedev of Russia will meet Stefanos Tsitsipas on Friday in a rematch of last year’s semi-finals at Melbourne Park.

Earlier in the day, Greek fourth seed Tsitsipas defeated No.11 Jannik Sinner (Italy) 6-3, 6-4, 6-2 in a lop-sided encounter that went on for two hours and six minutes.

Facing defeat, Medvedev got a breather. A six-minute delay in the third-set tie-break – for the roof at the Rod Laver Arena to be closed during a rain shower – swung the momentum mostly his way. Auger-Aliassime won only one of the last six points in the tie-break after dominating the first two sets.

The Canadian missed a match point on Medvedev’s serve in the 10th game of the fourth set as the latter saved it with a big first serve and then held with an overhead winner. The 25-year-old Medvedev broke Auger-Aliassime’s serve in the next game and later levelled the match at two sets all.

He got another service break when the 21-year-old Auger-Aliassime double-faulted in the third game of the deciding set. But, the quarter-final was not over yet. Serving for the match, Medvedev had to save two break points before closing it out.

“I was not playing my best and Felix was unbelievable. He was serving unbelievably well; he was all over me,” Medvedev said.

“And, I just thought ‘Okay. I am going to make him work’. If he wants to win it (the match), he has to fight to the last point,” added Medvedev. Auger-Aliassime had lost all three previous matches against the second-ranked Medvedev, but was the aggressor in the first two sets.

Meanwhile, Polish seventh seed Iga Swiatek beat the 36-year-old Kaia Kanepi of Estonia 4-6, 7-6(2), 6-3 in three hours and one minute to progress to the women’s singles semi-finals. In another final-eight match, Danielle Collins of the United States got the better of Alize Cornet (France) 7-5, 6-1 in one hour and 28 minutes.