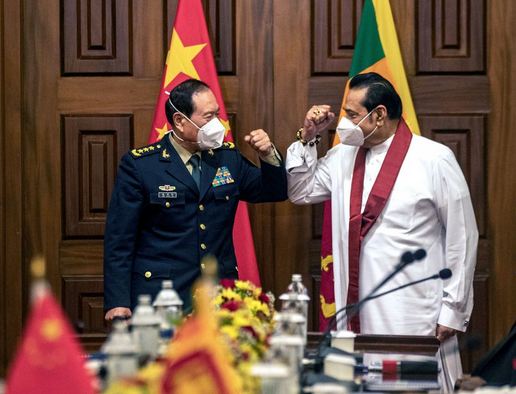 After postponing the arrival of high-tech research vessel 'Yuan Wang-5' at Hambantota port, the Chinese embassy has called for an urgent meeting with senior Sri Lankan officials. Sources have given this information.

Earlier, China's space and satellite tracking research vessel 'Yuan Wang-5' from Sri Lanka was allowed to stay at Hambantota port from August 11 to 17.

Sri Lanka's foreign ministry told the Chinese embassy in Colombo on 5 August that the ministry wanted to request that Yuan Wang-5's arrival in Hambantota be postponed until further advisory in the matter.

Some media reports said that India was concerned that the ship would be used to spy on its activities and had lodged its objection with Sri Lanka.

Sources said the Chinese embassy sought an urgent meeting with the country's high officials to discuss the issue after receiving a letter from Sri Lanka's foreign ministry seeking delay in arrival.

It is also being reported in some Sri Lankan news portals that Sri Lankan President Ranil Wickremesinghe held an in-camera meeting with Chinese Ambassador Zhenhonghe after postponing the docking of the vessel. However, the President's Office denied the media reports about the meeting.

On 12 July, amidst the political upheaval in Sri Lanka, the then government had approved the docking of a Chinese vessel at the Hambantota port.

Yuan Wang-5 is a very powerful ship
Let us tell you that Yuan Wang-5 is a very powerful ship of China. Apart from space and satellite tracking, it can also locate the lounges of intercontinental ballistic missiles. It is the third generation tracking vessel of the Yuan Wang series which was commissioned on 29 September 2007. The ship has been designed by China's 708 Research Institute. It is fitted with very powerful antennas which help it to monitor long distances.