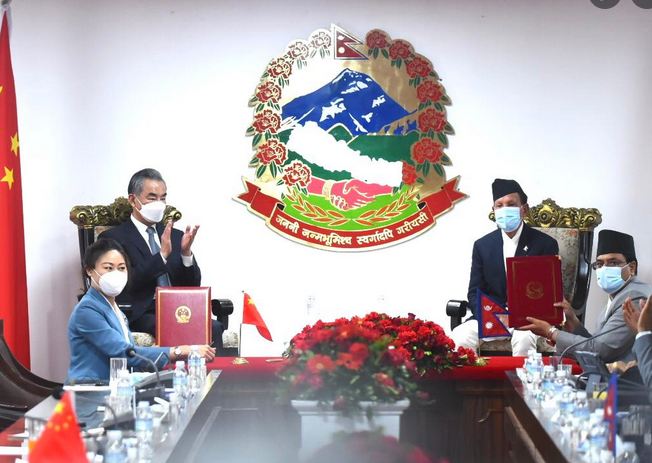 China has announced $15 billion in aid to Nepal. Chinese Foreign Minister Wang Yi said during a conversation with Nepal's Foreign Minister Narayan Khadka to give this amount. Khadka had left for China on Tuesday night. China had sent a special chartered plane to invite Khadka and the Nepalese delegation accompanying him. There, the matter of giving this big financial help was kept in front of him. The talks between the two foreign ministers took place in the city of Chiandao.

Happy with this, Khadka again reiterated Nepal's commitment to the 'One China Policy' in front of the Chinese delegation. He also promised that the Nepal government would not allow the use of its country's land against China. According to officials of the Foreign Ministry of Nepal, China has also agreed to consider Nepal's request to provide chemical fertilizers. He has said that he will conduct a study of the possibility of setting up a chemical fertilizer factory in Nepal. Earlier, on this request of Nepal, several rounds of talks have been held between the officials of both the countries.

According to observers, China is so desperate to prevent Nepal from joining the US camp that it has accepted almost every request made by the Nepalese delegation during the talks. Under this, China has agreed to assist Nepal in the agricultural sector. He has also agreed to increase the manufacturing capacity of Nepal and help in the production of traditional medicines here. During the Corona epidemic, China had closed the Nepal-China border at many places. This caused a lot of trouble to the Nepalese businessmen. Now both the countries have agreed to make common arrangements to strengthen the epidemic control measures on the border.

China will provide $ 15 billion in aid in 2022 for investment in projects that Nepal will select. According to a report in the newspaper Kathmandu Post, Nepal has not yet selected these projects. According to this report, Chinese President Xi Jinping had promised this financial help during his 2019 visit to Nepal. Now China has decided to release it.

In the Chiandao talks, the two foreign ministers also discussed the issue of Taiwan. Wang told Khadka that US House of Representatives Speaker Nancy Pelosi's visit to Taiwan was a "completely provocative act". A joint statement issued after the talks said - "Pelosi's visit to Taiwan was a serious violation of the US commitment to the One China policy." Wang appreciated the commitment of all governments in Nepal to the One China policy.

The joint statement said- 'Being developed countries and friendly neighbors in the midst of the current chaos in the world, China and Nepal support each other. They will jointly defend the core role of the United Nations, non-interference in internal affairs, and the golden rules of international relations.

According to observers, this visit of Khadka seems to be China's diplomatic victory at the moment. What is America's reaction to this, now it is the eyes of the analysts.