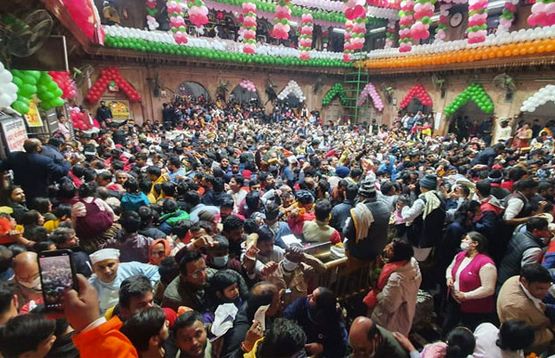 On Friday night on Janmashtami, where Kanha's birth was being celebrated in entire Braj including Mathura, on the one hand, two devotees lost their lives due to crowd pressure at Thakur Banke Bihari Temple in Vrindavan. The incident happened during Mangala Aarti. It happens only once in a year on the occasion of Janmashtami. Thousands of devotees thronged the Banke Bihari temple for the darshan of Mangala Aarti. During this, many devotees fell unconscious at gate number one and four of the temple, causing panic in the temple premises. Somehow the police pulled the devotees out of the temple. Due to the pressure of the crowd, two devotees died while seven were injured. Many officers including DM, SSP, Municipal Commissioner were present in the temple at the time of the accident, yet the arrangements for crowd control failed. It is said that during the Mangla Aarti in the Banke Bihari temple, there was a crowd of devotees many times more than the capacity. According to an estimate, more than one lakh devotees had reached Vrindavan for the darshan of Mangala Aarti. There was no place to even set foot in the temple premises. There was also a huge crowd in the streets of Banke Bihari temple. Many devotees fell unconscious due to the crowd, over whom many people passed. In the accident, the woman Nirmala Devi, wife Dev Prakash, resident of Noida Sector 99, and Ram Prasad Vishwakarma (65), a resident of Rukmini Vihar Colony Vrindavan and a native of Jabalpur, died. His wife is also injured
Seven devotees injured in accident