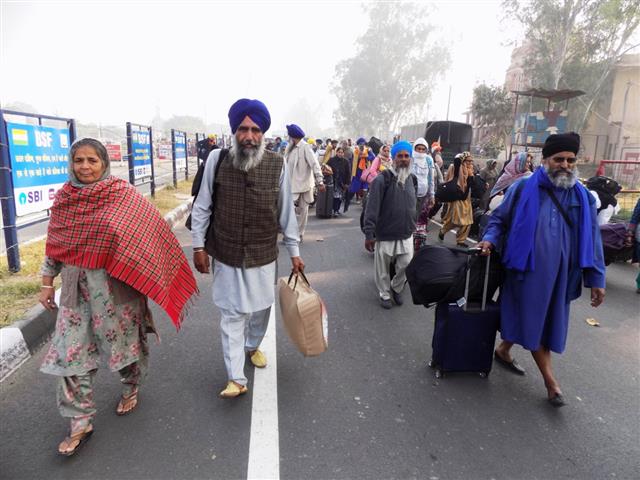 The first batch of 28 Indian Sikhs, including women, arrived at the revered Gurdwara Kartarpur Sahib in Pakistan on Wednesday by using visa-free corridor, some 20 months after the pilgrimage was suspended in March 2020 following the Covid-19 outbreak.

Similarly, over 2,500 Indian Sikhs arrived in Pakistan via Wagah border crossing to take part in the annual commemoration of the birth of Sikhism founder Guru Nanak Dev.

“As many as 28 India Sikhs including women visited the Kartarpur Sahib on the first day (Wednesday) after the Indian government reopened the corridor,” Evacuee Trust Property Board (ETPB) spokesperson Amir Hashmi told .

The ETPB looks after the holy places of minorities in Pakistan.

The pilgrims spent several hours at the gurdwara and offered religious rituals before crossing back to their homeland, he added.

“The yatris had been queued since 6am Wednesday. Immigration and vaccine and other Covid related tests made the process slow, causing a great deal of inconvenience for the pilgrims,” an official told Media.

He added that unlike the past practice, the yatrees would come here by foot instead of train. “This time they came by foot and that made the whole immigration process lengthy,” he said.

When asked about the exact number of Indian Sikhs who arrived via Wagah border crossing, Hashmi said, “Pakistan had issued 2,890 visas to Indian Sikhs for this occasion and so far over 2,500 have arrived. Hopefully by late in the evening all those issued the visas will reach here.”

Talking to reporters at Wagah, Shiromani Gurdwara Parbandhak Committee Delhi leader Sardar Balwinder Singh said that Sikhs are very happy after the reopening of the Kartarpur Corridor. He also expressed satisfaction over the upkeep of the Sikh holy places in Pakistan.

Dr Ahmed said the ETPB welcomes the Sikhs all over the world and it will try its best to provide them with best facilities during their stay in Pakistan.

He said the main event in connection with the birth anniversary of Guru Nanak will be held at Gurdwara Janamasthan Nankana Sahib on Friday. All visiting yatrees will be taken to the Gurdwara Kartarpur Sahib during their 10-day stay.

In November 2019, Prime Minister Minister Imran Khan had formally inaugurated the Kartarpur Corridor as part of commemoration of the 550th birth anniversary of Guru Nanak at a colourful ceremony, paving the way for Indian Sikh pilgrims to visit one of their religion’s holiest sites in Pakistan without needing a visa.